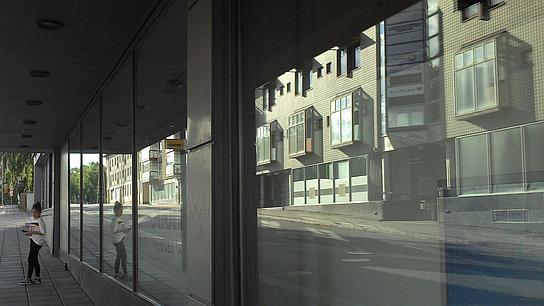 As a society develops and grows, its individuals become more dependent upon it and their roles increasingly specialize. Cohesion is achieved by means of a shared cultural narrative. To survive this must compete with others in the thoughts and behaviours of individuals. On being believed, its information replicates and its society grows.

An environment consists of beings as well as matter. On being heard, conversations between them begin. These develop, gathering together societies of mutual interest and dependency in which individuals obtain greater benefit from their work than they would alone. Three or four billion years ago, soon after life on Earth began, this surplus, social capital gave birth to the world of social beings that we know today.

With others, reproducing us, it feels good to be social, individuals, parts of a whole.
2.   Colonies.

The sociality of virus, microbe, and animal, blended together and evolving inside and around us, has given rise to what we come to know as 'us'. Yet only about half our cells are actually human. The rest are bacteria, without which we would struggle to be. For these microscopic beings our body is the environment. They live in it as dismissive of our needs as we seem to be of the needs of ours.

I am animal and bacteria, a social reef, my bones and teeth: coral on which I grow my mind emerging; my soul ineffable.
3.   Modularity.

From elemental sociality, individual, multi-cellular life-forms evolved. Our life-form evolved colonially, and developed as groups of individuals, from extended families into tribes, nations, and pan-continental empires. Although our narcissism looks for clear water to separate us from other beings, we exist as elements, as societies and environments. Our technology sets us apart but essentially we are not so different. Sport, music, and art, express and develop cultural cohesion. Hunting and warring, reproducing and protecting young, at their core are social acts, resourced from social capital and serving to produce it.

We are proud to be individual, we do not flock, we say we live in society not cultures.
4.   Expectation.

Born expecting to be understood, we have learned to see, to hear, and to feel within the cultural environment that surrounds us. We grow, developing our behaviours consciously and unconsciously, to be interpreted by those around us. Our sense of security and of home, is founded in the groups our culture represents. Its customs and artifacts, buildings and stories enfold, nurture and manifest who we are. Before we can stand we fight to be free —it's something we line up and die for— yet when deprived of connection we become anxious, or bored. In order that our society, and our species, evolves and survives, we as individuals have evolved to die.

Growing in a matrix, to which I adapt, through the pattern it provides I make sense of my world and myself.
5.   Selection.

The environment of a being is the series of spaces it knows by experience. This is constructed by perception as much as by physics and biology. In the course of ontogeny, personal perception develops by reference to a surrounding culture. This frames experience and informs the interpretations we make of others and of ourselves. We survive as an integral element of an environment. However we shape it, still we are shaped by it. Although often cited that finches have adapted to their environment, through selecting those beings that suit it, the environment shapes those that survive.

The world changes, so fitness is key. Evolution has no interest, nor cares. The environment, not merit, selects.
6.   Reproduction.

Cultures of family, tribe, and community, nest within one another like Russian dolls. Adapting within these as we grow, even when they contradict one another we integrate and absorb their narratives into singular, personal cultures. These then inform our feelings, thoughts, and behaviours, the commonalities between them facilitating interpersonal communication and aggregating individuals into nested groups. Reproduction involves the transmission of cultural codes, as well as those of biology. cultures compete and cooperate with one another as individuals do. They reproduce by being believed, growing and evolving whether perceived within their native societies or alien ones.

Cultures support the narrative of our lives, keeping us innocent, victims, and victors, defending our rights from what's wrong.
7.   Massed behaviour.

The boundaries of individuals soften in a social crowd. Their differences unconsciously resolved in their common culture they merge. Through narratives of justice and belief, cultures comfort, terrify, and excite. Holding together the societies on which their individuals depend, they shepherd them to labour and to war, to repress or revolt. With lifespans far greater than those of their individuals, cultures develop and grow, their collective mass increasingly behaving like a single entity as it responds to the threats and opportunities it perceives, replacing its leaders, changing its mind.

As a culture grows, its individuals occupy increasingly specialized roles, and complex strategies develop to exploit their social capital. To release this from the risks and responsibilities that constrain individuals, limited companies were created. These have the rights of individuals —to own property, enter into contracts, employ others, and sue for damages— while having less responsibility. They were the first artificial beings, their virtual intelligence a simple algorithm of cupidity. Serviced by people, they were conceived to drive our industry but have developed and grown to direct the economies of our nations. While our brains and world have shrunk, from handprints on cave walls to printing presses and HTML, for more than 65,000 years virtuality has grown.

The inclosure of common land drove nations of extended families off the land to live in townships. Their new tenement quarters were then cleared, and religious charities, industrialists and landlords, rehoused them in model homes. When the World Wars of the 20th century exterminated a generation of european males, families were rendered down still further. To better suit the needs of industry and business, their education was consolidated as training, and knowledge was translated into procedures. Societies infantilized, social capital was digitized, and scientism supplanted old religions. In increasingly finely segregated populations virtual cultures bloomed, nurtured and watched over by 'machines of loving grace'.

With bodies and minds virtually absorbed, in honeycombed cells the future lies, nodes on a network, plugged into hives, workers, soldiers, and queens.

Social capital is the value that arises from the mutually advantageous social cooperation that shared behaviours and values enable and encourage.

An algorithm is simply a method for doing something. Some are finite, and lead to results that are expected and well defined —an algorithm to boil an egg, or to build a space ship, for instance. Others are recursive: At some point in their execution they invoke themselves, and by doing this, they can generate an infinite sequence of results, some simple, such as the set of ordinal numbers, others complex, such as the fractal pattern of the Mandelbrot set or the artificial intelligence that enables machines to learn on their own.

The laws that create limited companies is the rule-set of a recursive algorithm. This endlessly evolves increasingly complex patterns of social form and behaviour.

It seems reasonable that the directors of a company should protect the investments that are made in it. It is as unsurprising as it is reassuring that the law holds them personally accountable for any loss or damage that shareholders, or the company, may suffer. However, although maximizing profit is not the only duty of trust that company directors have, it is the one that carries the greatest risk for them personally —assuming they act reasonably in other matters. It ensures that this elementary algorithm of cupidity is the prime directive both for them and their companies.

Each of us does the things we do because, as far as we can understand, doing them best promotes our own interest. Artificial beings do the same.

Progressing through cultural as well as physical adaptation, evolution is driven by what the next generation is learning. The framework of knowledge that nurtures this understanding is the culture of its society, and is more powerful, and of greater and more fundamental, long-term value than that which comes from direct application of the knowledge itself

The stanza is taken from the poem: 'Little Gidding', written by T.S Eliot during the air-raids on Great Britain in World War II.

Dissatisfied with each draft, and believing the problem was not with the poem but with himself, Eliot abandoned it, returning to finish it the following year. The concluding poem in a volume of four, it was published in 1943 as: 'Four Quartets'.